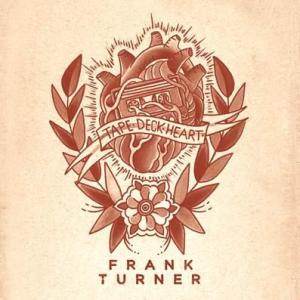 In the week that his fifth studio album ‘Tape Deck Heart’ was released, Frank Turner was in a distinctly upbeat mood.

The former frontman of hardcore punk outfit Million Dead hasn’t always had an easy ride since he made the transformation into folk-rock troubadour seven years ago. Overnight sensation, he is not.

But with a hit single (‘Recovery’) under his belt, not to mention a headline show at Wembley Arena and a cameo at the Olympics opening ceremony, he is now well-equipped to not just sell out, but truly own venues like the Kentish Town Forum for many years to come.

Warm-up act Larry and His Flask did a tremendous job of getting the capacity crowd moving with their turbo-charged hobo blues. If Seasick Steve ever joined Gogol Bordello, it would sound something like this.

After a minor technical delay (possibly relating to a live YouTube stream of this gig), Turner took to the stage with standout anthem ‘Four Simple Words’. This looks set to become a fan favourite with its dynamic juxtaposition of dancehall waltz, chest-beating punk and the irresistible refrain: “I want to dance”.

From here on the show progressed like a greatest hits compilation, with Turner freely flitting between all five of his studio albums. Recent album cuts ‘Polaroid Picture’ and ‘Good & Gone’ were met with the most muted responses, suggesting…

It takes a pretty prolific songwriter to turn out four albums in six years and still have enough left in the tank to record two twenty-track compilations. But not only has Frank Turner managed this, he has done so with style and aplomb, especially on this, his second collection of live tracks, b-sides, covers and rarities.

‘The Second Three Years’ crams together the non-album tracks from his 2010 ‘Rock n Roll’ EP, the special edition bonus tracks from last year’s ‘England Keep My Bones’ LP, as well as a broad selection of punk, folk and pop covers; from Wham to Nirvana, and from NOFX to Take That.

This compilation is an essential purchase for any serious Frank fan, but it also works suitably well as a far-reaching introduction to one of England’s greatest songwriting talents. Right from the opening acapella verse of ‘Sailor’s Boots’, Turner’s voice is enthralling; by turns gentle and powerful, intimate and abrasive.

For the fifth year running, here are my top 20 Albums of the Year. Follow the links to listen to each one for free on Grooveshark, Spotify or YouTube.

With quite a considerable weight of expectation on their shoulders after 2008’s The Seldom Seen Kid scooped the Mercury Music Prize, to start their follow-up album with an eight-minute epic should win Elbow album of the year on sheer audacity alone. Of course it helps that The Birds is a gently brooding masterpiece, complete with intricate synth riffs and a glorious orchestral crescendo.

Build A Rocket Boys! is the sound of a band finding their groove and loving every minute of it. From the joyous stomp of Neat Little Rows to the tender nostalgia of Lippy Kids, this record sees the Manchester quintet on top form. As if that wasn’t enough, they can pull it off with aplomb on the biggest of stages (see above).

A triumphant return from Grohl and co, which only narrowly misses out on the top spot, Wasting Light is possibly the band’s most consistent record since 2001’s There is Nothing Left to Lose. The minute the video for White Limo was released on YouTube, Foos fans knew they were in for an old-school treat. The album more than lives up to this promise; with the tortured I Should Have Known and the anthemic Walk providing a fantastic finale.

The most prolific man in folk turned out another exceptional album this year, as his career continues scaling ever higher peaks. Frank is due to headline Wembley Arena next year and that would seem mildly ludicrous were it not for this collection of colossal songs. With a beefed up full band sound on If Ever I Stray and a few nods to his hardcore past on One Foot Before The Other, the Wessex troubadour is turning into a force to be reckoned with.

Better known as the Sleeping Souls (Frank Turner’s backing band) plus singer Jamie Stuart, Dive Dive deserve high acclaim for their long-awaited third album. From the alarm-clock riff to Mr 10% through to the bravely optimistic title track closer, this is an album full of ideas, emotion and unflinching honesty.

It’s hard to believe that Ms Marling is still only 21 years old. Her third record is one of world-weary wisdom, mythology and magic. The expansive soundscape of I Was Just A Card and the brooding lustfulness of The Beast offer plenty of variety. And to top it all off, Sophia is probably the single of the year.

Ten years is a long time to wait for a sophomore record, but thankfully Walter Schreifels et al have rewarded their loyal fans’ patience. Drawing on influences as diverse as Weezer and The Temper Trap, this record is packed full of tunes. My main criticism would be that at just 34 minutes long, it’s too short.

7.) Danananaykroyd – There Is A Way

One of the casualties of 2011, it’s a real shame to lose the Scottish noise punks so soon after releasing their finest album. With producer Ross Robinson at the helm, this was a much more refined effort than their debut and the upbeat swagger of Muscle Memory is well worth a listen.

On the first listen through, I thought this was shaping up to be the album of the year, but then it all goes horribly wrong. The first four tracks of this record are absolutely flawless, with the joyous singalong of Pensacola the standout, but from then onwards the only track worth mentioning is the spectacular title track.

My guilty pleasure of the year sneaks into the top ten. This may be one of the most heavily produced records of the year, but it’s hard to resist the charm of this fantastically well-written album.

By far the best record of the year to be based on a 1960s prison movie. The execution of this ambitious idea is ropey at times, but the glorious crescendo of Three Escapes and Plastic Jesus 2 bring about a very satisfying finale. Definitely ones to watch in 2012…

All in all, 2011 was a brilliant year for new albums, far better than 2010. The respectable efforts from Arctic Monkeys, Blink 182, Twin Atlantic and Sam Duckworth all missed out on the Top 20, although the less said about the fourth Art Brut album, the better… As always, any recommendations and tips for 2012 are most welcome, but for now I’ll leave you with this year’s best video:

Given that I have now dedicated this blog entirely to music, it may not surprise you to learn that I am quite the music fan. Scratch that, I am a music obsessive. I have a CD collection over 200 discs strong (carefully alphabetised, natch), I own more band t-shirts than any other type of clothing, and I have been to more gigs than any sane person should be able to remember – only I can, because I have a creepy OCD document for that.

So if you are like me, or even a little bit like me, you will love Setlist fm. Maybe you’re already familiar with it?

This site chronicles every gig played by every band ever. Or at least every gig that someone has uploaded a setlist for, and that’s quite a few.

Great aspects of this site include the stats (oh, the stats!) and the geeky annotations (did you know that Muse’s headline set at Reading included a Sweet Child of Mine outro for Hysteria?!).

What’s more, I was particularly interested to find out the other day that you can track particular bands that you are super-obsessed with. So now, I will get e-mail alerts everytime someone uploads a new Frank Turner setlist.

However, whilst perusing the BBC’s excellent footage of Reading and Leeds, I stumbled across what appeared to be a competitor. You see, the BBC’s festival setlists are ‘powered by Songkick‘.

This site offers something that Setlist fm does not: a personalised feed of all the local shows being played over the coming months by bands you like. Almost immediately, my girlfriend warned me that this was the perfect way for me to spend all of my monies, and more, on gig tickets, and indeed using this site requires a bit of willpower to resist going on a spending spree.

You can also sync up Songkick with your iTunes library, Last.fm or Pandora account and it will import all your favourite bands, then show you when and where they are playing next – and how much it will set you back. This is powerful stuff, kids!

Other big plus points include the ability to share which gigs you’re going to, or even just thinking of going to, in one click. I did this on Facebook and immediately found out one of my friends happened to be going to the same gig as me later this month.

Also, there’s an iPhone app, if that’s your thing, and you can track individual venues as well as bands, although I’m not entirely sure why you’d want to…

To answer the question at the top of this post, the answer is: use both. The actual setlist aspect of Songkick seems more like an afterthought as they aren’t that easy to reference quickly, so Setlist fm will continue to take priority there.

Setlist fm is great for looking back over the gigs you’ve been to and Songkick is exciting and inspiring for finding out about gigs that are coming up. I wholeheartedly recommend signing up to them both.