Tomorrow sees a momentous occasion in British politics. It will be only the second time in the history of this country that the public will be asked to give their opinion in the form of a referendum, yet not many people seem at all excited about it.
Before I lay out my case for AV, it’s worth considering why the turnout is likely to be so low.
Particularly in my region, London, where there are no local elections to get people out to the polling stations, the turnout is predicted to be pifflingly low. We’re talking 15 per cent compared with 35 per cent in the provinces.
Despite weeks of explaining the pros and cons of both systems and some heavy-handed political mud-slinging, people just aren’t that interested. I believe this is down to a key disenfranchisement at the state of our electoral system, something that AV could fix.
Under First Past The Post, its easy to feel like your vote doesn’t count and be forced into a tactical voting compromise. Growing up in a Tory heartland, I felt there was little I could do to change things, especially with the centre left vote being split between Labour and the Lib Dems.
Simply put, under AV, you can have your say on a sliding scale, i.e. ‘I want the Lib Dems to get in, but if not them, then Labour and whatever we get, don’t let the Tories in again.’
Or, to put another way, the general collective consensus is more powerful than a concentrated group of people why think exactly the same way, as in the beer vs coffee metaphor put forward by the Yes to AV campaign: 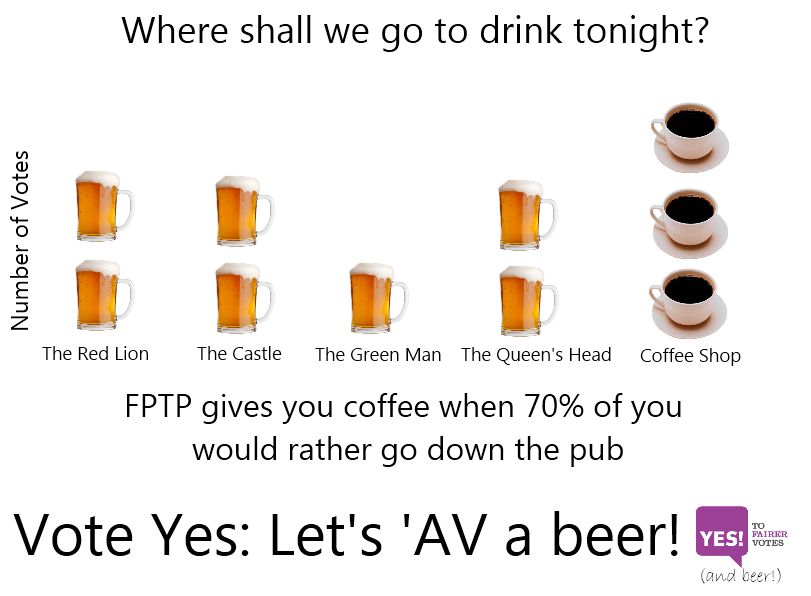 The suggestion that this system is too complicated for the public to understand is one of the most self-damaging arguments that the No to AV campaign has put forward so far. For starters, it insults the intelligence of the population and moreover it conveniently skates over the fact that the AV system is already used and readily understood in many mayoral elections, such as the one that saw Boris Johnson elected in London in 2008.
The second myth that urgently needs debunking before we go to the polls is that of price. AV will not cost us £250 million. That’s just a bare-faced lie and Chris Huhne and Nick Clegg have both had the guts to say so in so many words. Electronic voting machines are not an essential or even necessary part of switching to AV and public education about the new system needn’t cost that much for the reasons outlined above.
Finally, I really don’t buy the idea that we shouldn’t switch to AV because only three other countries in the world have it. When we abolished slavery we were one of the first countries in the world to do that, so sticking with what we’ve always had and what few others are doing isn’t always a bad thing.
Whatever your political beliefs and thoughts about AV or FPTP, please go and make your voice heard at the polling station tomorrow.
It’s our first chance to directly influence a major policy decision in nearly 40 years and may be our last for another 40. Please don’t let it pass you by.

So Thursday night’s election results were quite the anti-climax for the Lib Dems, worthy of England’s most disappointing tennis player. Feverish polls which had predicted a 30% vote share proved wildly inaccurate, with the third party even winning fewer seats than in 2005. It seems that the impact of the television debates has been grossly overstated, as The Times’ chief leader writer Daniel Finkelstein predicted at the very start.

There are a few key points to conclude from this. Firstly, that voter allegiances run too deeply to be significantly affected by three televised debates, which, lest we forget, less than 20% of the country actually watched. Secondly, that for the Lib Dems to ever stand a chance of unseating Labour, we will need drastic electoral reform, probably in the form of proportional representation. Thirdly, that faced with the option of voting for an unproven party in the middle of an economic downturn, the electorate bottled it, and understandably so. No time for a novice, indeed.

However there are a few silver linings. Firstly the Lib Dems could achieve significant gains from a hung parliament. As I write this, the Yellows are believed to be considering a power sharing deal from David Cameron which could see Lib Dem MPs in the Cabinet and even limited concessions on electoral reform. Secondly the fringe parties such as the BNP, UKIP and Respect failed spectacularly. Nick Griffin polled third and was verbally tarred and feathered and chased out of town by Margaret Hodge, Nigel Farage’s plane crashed, George Galloway even wimped out of hearing the verdict of my constituency, who roundly rejected him. Thirdly the Green Party took a big step forward by taking Brighton Pavillion to make Caroline Lucas their first ever MP.

At the end of such an extraordinary election it is easy to see this as a victory for those same two parties who we’ve been stuck with for 80-odd years. But the more you inspect the results and consider the implications of a hung parliament, it becomes clear that politics in the UK just became a lot more open and far more interesting.