Like many people who crowd London’s parks, I’m a runner. I also like music quite a lot. So jog.fm is a great site for mixing the two.

Using the very simple idea of matching your running speed to a track’s bpm, it allows you to build up playlists that suit your average pace.

Jog.fm seems to fill quite a useful gap in the market and if they could only expand their collection of tracks beyond the slightly limited range on there at the moment, it could become massively popular.

For the record, I find that Dance, Dance, Dance by 65daysofstatic and Race To The Heart Of The Sun by The Automatic are particularly good running songs for running an eight-minute mile.

On a related note, I am running the Bupa London 10k tomorrow on behalf of the Free Representation Unit. This legal charity provides representation for Brits who cannot afford it otherwise, including workers who have lost their jobs and are not entitled to legal aid. The vast majority of their staff are volunteers, yet they handle over 1,000 cases per year.

Please visit my Just Giving page and donate a few pounds, and you can be sure they will be put to good use.

I think its fair to say that the Spotify honeymoon is well and truly over. When the online jukebox burst onto the scene in late 2008 it was greeted with fevered excitement, but the proliferation of annoying adverts and the recent clampdown on free users signals the end of the party and the start of a long and tough road towards making this large business profitable.

So what now if you’re not willing to shell out at least £5 a month for ad-free music? Well, since you asked – I’ve recently been introduced to an exciting music service called Grooveshark and on the surface it seems to be a serious rival for Spotify. 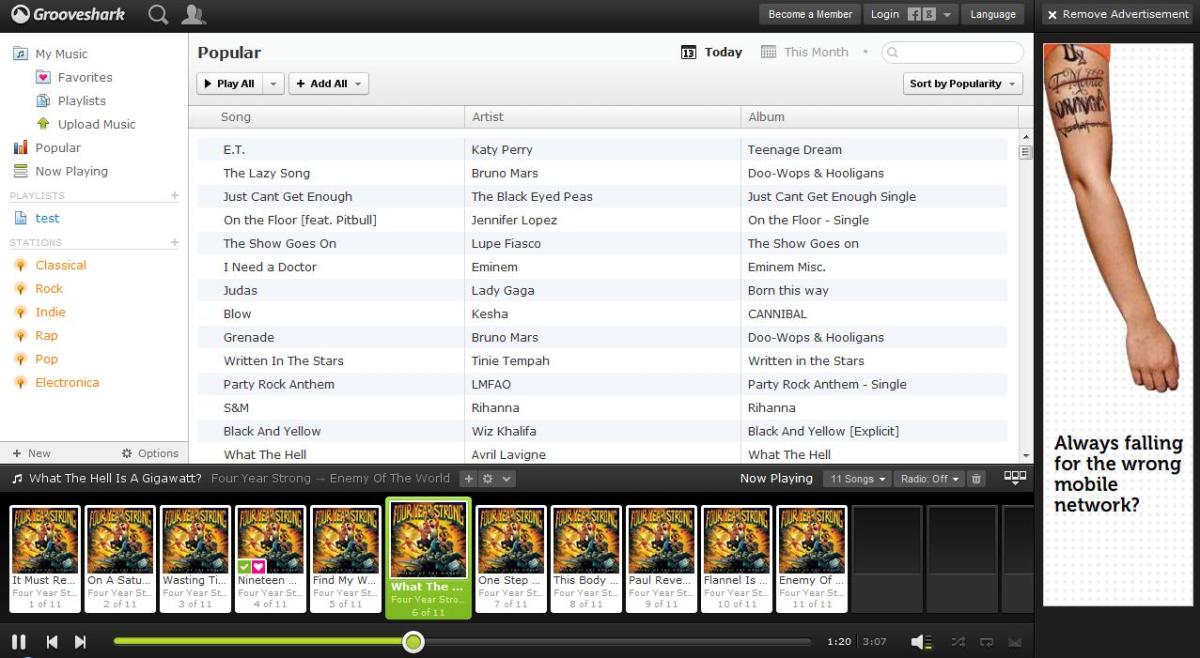 Lets start with the pros. There are no audio ads, just banners, which is something I find remarkable. As a result the listening experience is completely seamless. Secondly, it’s browser-based, so there’s no need to download any software or get an invite.

Of course there are a few drawbacks to consider. The selection of songs isn’t as comprehensive as Spotify, with only three 30 Seconds to Mars tracks on there for example, as they are uploaded by users. This approach has led to questions over the service’s legality, although they deny any copyright infringements and claim to have agreements in place with music labels.

Secondly, sometimes there is a small lag at the beginning of each song as they have to be buffered one by one. Finally, I have spotted one track that sounds like it’s been recorded off a radio station, only because there is a few seconds of a DJ talking at the end. Otherwise, the quality is superb, though.

On balance, it’s a hugely appealing service, especially considering that some major artists, such as Metallica, are on Grooveshark and not Spotify. You can also listen to genre-specific channels, which is great if you want to stumble across new acts.

Best of all, Grooveshark aren’t pushing the financial side of things particularly hard, with seemingly no limits on the free streaming service. Becoming a paying member ($6 per month) gets you the ability to remove banner ads and upload your own music, and they are also offering a 30-day bundle in conjunction with Lovefilm and Dominos Pizza for £12.50.

Grooveshark will surely look to sink its teeth into users once they’re hooked (pun intended), but for now it represents a great alternative to Spotify for discovering new music for free without any irritating interruptions.

Tomorrow sees a momentous occasion in British politics. It will be only the second time in the history of this country that the public will be asked to give their opinion in the form of a referendum, yet not many people seem at all excited about it.
Before I lay out my case for AV, it’s worth considering why the turnout is likely to be so low.
Particularly in my region, London, where there are no local elections to get people out to the polling stations, the turnout is predicted to be pifflingly low. We’re talking 15 per cent compared with 35 per cent in the provinces.
Despite weeks of explaining the pros and cons of both systems and some heavy-handed political mud-slinging, people just aren’t that interested. I believe this is down to a key disenfranchisement at the state of our electoral system, something that AV could fix.
Under First Past The Post, its easy to feel like your vote doesn’t count and be forced into a tactical voting compromise. Growing up in a Tory heartland, I felt there was little I could do to change things, especially with the centre left vote being split between Labour and the Lib Dems.
Simply put, under AV, you can have your say on a sliding scale, i.e. ‘I want the Lib Dems to get in, but if not them, then Labour and whatever we get, don’t let the Tories in again.’
Or, to put another way, the general collective consensus is more powerful than a concentrated group of people why think exactly the same way, as in the beer vs coffee metaphor put forward by the Yes to AV campaign:

The suggestion that this system is too complicated for the public to understand is one of the most self-damaging arguments that the No to AV campaign has put forward so far. For starters, it insults the intelligence of the population and moreover it conveniently skates over the fact that the AV system is already used and readily understood in many mayoral elections, such as the one that saw Boris Johnson elected in London in 2008.
The second myth that urgently needs debunking before we go to the polls is that of price. AV will not cost us £250 million. That’s just a bare-faced lie and Chris Huhne and Nick Clegg have both had the guts to say so in so many words. Electronic voting machines are not an essential or even necessary part of switching to AV and public education about the new system needn’t cost that much for the reasons outlined above.
Finally, I really don’t buy the idea that we shouldn’t switch to AV because only three other countries in the world have it. When we abolished slavery we were one of the first countries in the world to do that, so sticking with what we’ve always had and what few others are doing isn’t always a bad thing.
Whatever your political beliefs and thoughts about AV or FPTP, please go and make your voice heard at the polling station tomorrow.
It’s our first chance to directly influence a major policy decision in nearly 40 years and may be our last for another 40. Please don’t let it pass you by.