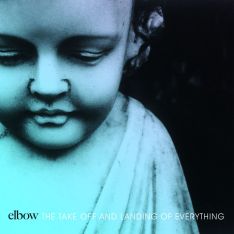 Luckily most Elbow fans will know that Guy Garvey and co’s work doesn’t yield up even half of its brilliance on a first listen through and, sure enough, ‘The Take Off And Landing Of Everything’ is the definition of an album that gradually grows on you.

Anyone expecting a rehash of 2011’s ‘Build A Rocket Boys’ or the 2008 Mercury Prize winning ‘The Seldom Seen Kid’ will not find it here. Instead, you’ll get more joy comparing the new album to ‘Cast Of Thousands’ or even ‘Asleep In The Back’.

Opener ‘This Blue World’ is unashamedly slow-burning and hints at the mid-life crisis element that Garvey alluded to in promo interviews. However, the shoe-gazing doesn’t last too long and from here the pace gathers and the ideas swell.

‘Charge’ is a tempestuous yet understated track with bursts of orchestral brightness in the chorus, and then we come to ‘Fly Boy Blue / Lunette’. This six-minute marvel is right up there with the finest tracks Elbow have ever recorded.

An insistent bassline is punctuated by flourishes of tenor saxophone in the stomping, swaying chorus, before the bravado gives way to a sweeping outro that is humblingly beautiful. Garvey murmurs timelessly elegant lyrics that will serve as a fitting epitaph when the band decide to eventually go their own ways:

Next up is the lead-off single ‘New York Morning’, which is the closest this album comes to radio bothering catchiness and true mainstream appeal with the first proper guitar lick on the album. The choruses get progressively grander and grander until it’s hard to resist singing along.

Then comes the Elbow nostalgia – ‘Real Life (Angel)’ has shades of ‘Grace Under Pressure’, while the studio outtakes and laughter at the start of ‘Honey Sun’ are strongly reminiscent of ‘Leaders Of The Free World’.

‘My Sad Captains’ is a touching tale of hungover camaraderie, but the true climax of the album comes on the title track, which swells and swells across seven orchestra-laden minutes to an anthemic climax. However, you won’t find yourself harking back to ‘Open Arms’ or even ‘One Day Like This’, more the carnivalesque joy of Doves’ ‘There Goes The Fear’.

It wouldn’t be a proper Elbow album without a quixotic closer (preferably a waltz) to leave you with something to think about, and ‘The Blanket Of Night’ fills that role nicely with militaristic overtones, lilting strings and eerie synth.

When I first heard this album, it was in a Canary Wharf pub as part of a poorly organised album playback, where the subtleties were lost amidst drunken business chatter and a lot of background noise. That is the worst way to listen to this album.

Instead, grab a decent pair of headphones and go for a nice long way through a busy city (preferably New York). Your ears will thank you afterwards.