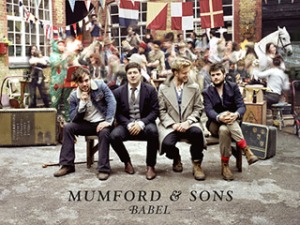 Pressure, what pressure? With three years of expectation on their shoulders, Mumford & Sons have finally followed up their monumentally successful debut album (which went multi-platinum on both sides of the Atlantic) with a record that they describe as “unashamed”.

‘Babel’ picks up where ‘Sigh No More’ left off, as the band stick to the recipe which got them where they are today. Produced once again by Markus Dravs (the man behind the most recent Coldplay and Arcade Fire albums), all the key hallmarks are present in these 12 tracks, from three-part harmony vocals to rapid banjo arpeggios and the odd orchestral flourish. Those hoping for a David Bowie-esque reinvention will be left disappointed; there is not a track on here that would sound out of place on the previous album.

The direct and uplifting title track sets the tone and foot-stomping tempo for the first half of this record, while ‘Whispers In The Dark’ keeps the ball rolling nicely. Lead-off single ‘I Will Wait’ is a definite highlight with a simple, yet fantastically sing-able chorus and a rousing crescendo.